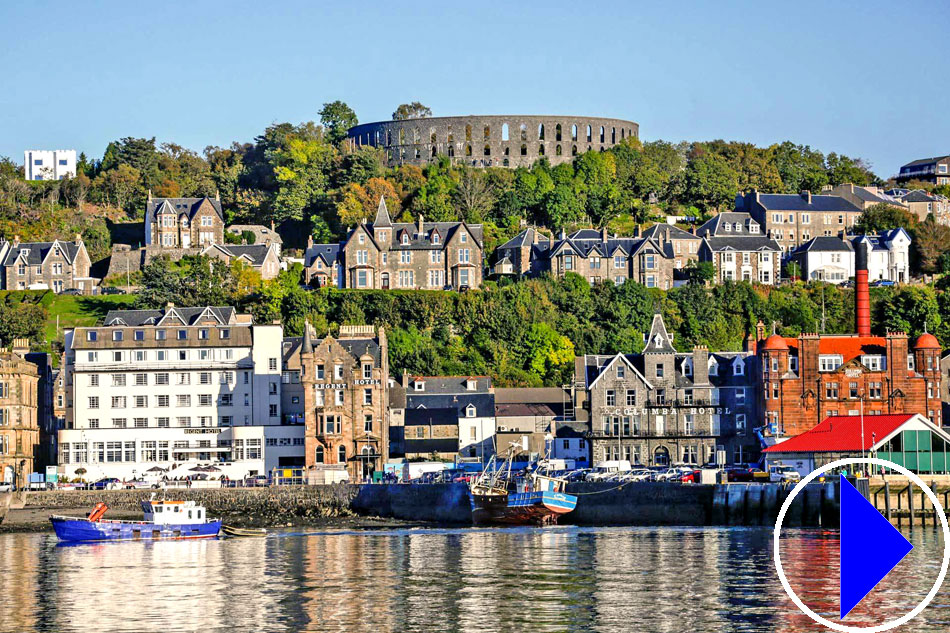 Live Webcam in Oban in Scotland

More info: Oban is a picturesque resort seaside town that is known as the Gateway to the Hebridean Isles as the port is the key mainland ferry terminal for crossings to Mull and several of the Outer Hebrides as well as the Inner Hebrides.

Oban sits aside the dark blue waters of the Firth of Lorn overlooking the Islands of Mull, Kerrera and Lismore.

The sea-front of Oban has many hotels and guest houses on the Esplanade along with shops, restaurants and bars of the town centre. The residential areas occupy the slopes and terraces leading back from the main town area and accessed by fairly steep streets. Most of the buildings are 19th century, save a couple of old inns and the distillery.

Oban distillery is one of the oldest distilleries in Scotland, having been established in 1794. Additionally, it is especially unusual for being one of the last surviving urban distilleries. The distillery was founded by two brothers, John and Hugh Stevenson, who were from Oban themselves. The distillery was founded on the site of an old brewery and has been incredibly influential on the town itself, as it was a major source of industry.

The ruins of Dunollie Castle occupy a strategic location overlooking the entrance to the bay. This site has been occupied since the Bronze Age, giving some indication of the importance of the area.

Oban has has had a strategic role in several wars, acting as an important base for the Battle of the Atlantic in World War II, and as the landing point for the first Transatlantic Telephone Cable during the Cold War, which carried the hot line between the US and USSR presidents.