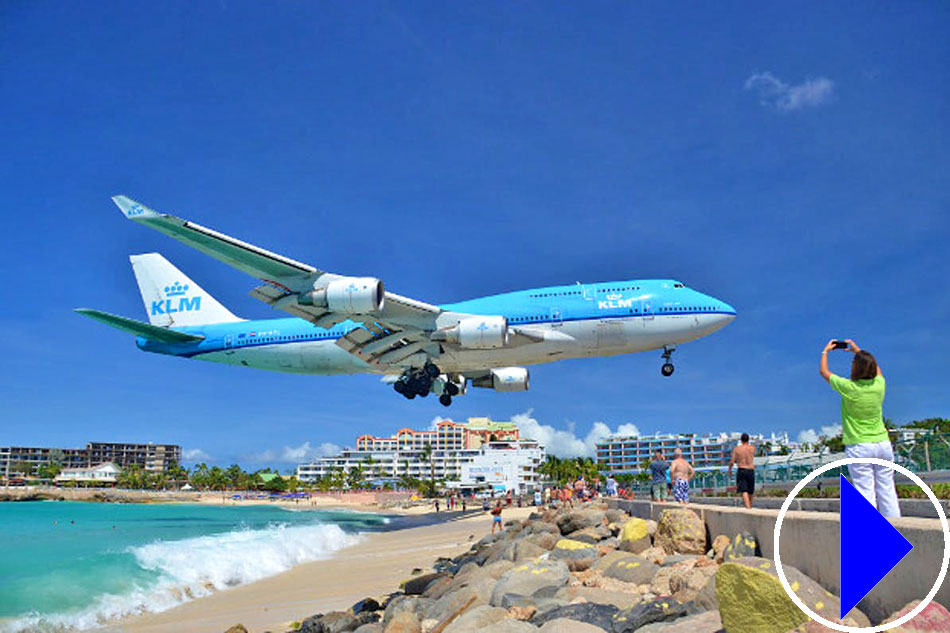 
More info: The airport’s runway at St. Martin, is just over 7,500 feet in length, which puts it right on the limit for larger jets arriving. This means aircraft having to use every single foot of runway, and pass low over the water and beach on landing. Take off is just as exciting as observers standing too close are likely to get knocked off their feet from the huge jet blast from the planes. It has become a great attraction for visitors and tourists to watch aeroplanes landing and taking off in such close proximity to the beach despite the dangers. In 2017 a New Zealand woman died from injuries sustained by jet blast from a departing aircraft and tourists have been often criticised for dangerous behaviour on the beach.

Plane spotting has become so popular that the Sunset Bar on Moho Beach next to the runway writes up flight schedules on a surf board.

The airport originally began as a US military airstrip in 1942 during World War II. The following year the first commercial flight landed on 3 December 1943. The future Queen Juliana visited the island using the airport in 1944. Eventually, the airport was named after her. In 1964 the airport was remodelled and relocated, with a new terminal building and control tower.

On 6 September 2017, the airport suffered significant damage when Hurricane Irma struck the island as a Category 5 hurricane.