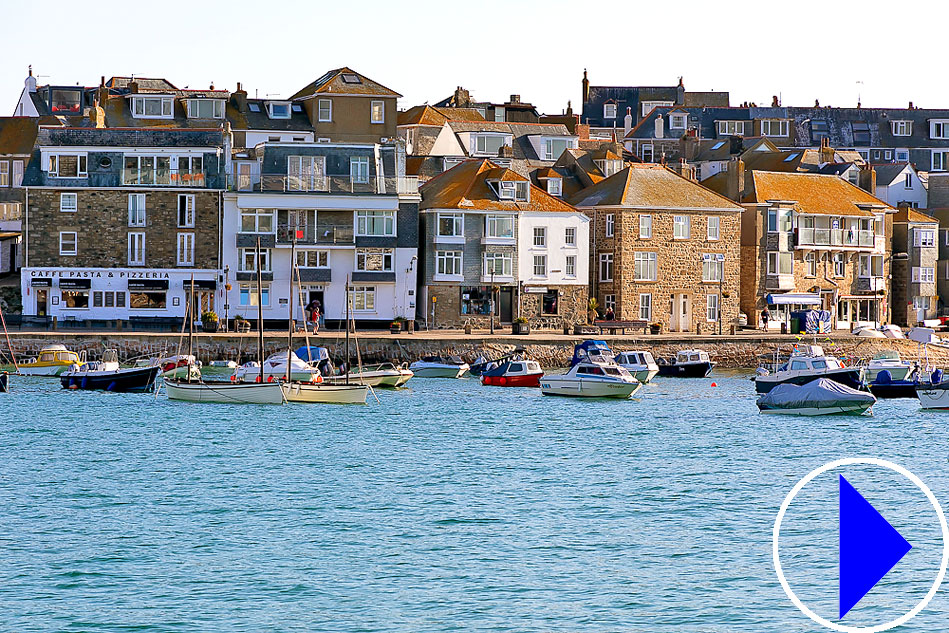 More info: St Ives in Cornish is Porth Ia, meaning "St Ia's cove" whos name is attributed in legend to the arrival of the Irish Saint La of Cornwall in the 5th century. St Ives is a seaside town located north of Penzance and west of Camborne and 20 miles away from Lands End, the Southernmost point of the United Kingdom.

The harbour at St. Ives is sheltered by the headland of St Ives Island and Smeaton's pier. Close to the harbour, its streets are narrow and uneven while its wider streets are in the newer parts of the town on rising ground.

Since medieval times fishing was important in St Ives and it was the most important fishing port on the northern Cornish coast. The decline in fishing, however, caused a shift in commercial emphasis, and the town is now primarily a popular seaside resort. While commercial fishing is much reduced, the harbour is still in use along with recreational boating, tourist fishing and day trips to the nearby seal colonies on the Carrack Rocks and other coastal locations.

A type of Victorian fishing boat unique to St. Ives, known as a "jumbo," was recently replicated by boatbuilder Jonny Nance to celebrate the town's maritime heritage. Today the jumbos are operated by the St. Ives Jumbo Association.

St Ives first lifeboat station was built at Porthgwidden beach in 1840. It proved to be a difficult site to launch from and in 1867 it was replaced by a building in Fore Street. In 1911 a new boathouse was built on the Quay, and then in 1993 a larger station was built at the landward end of the West Pier.