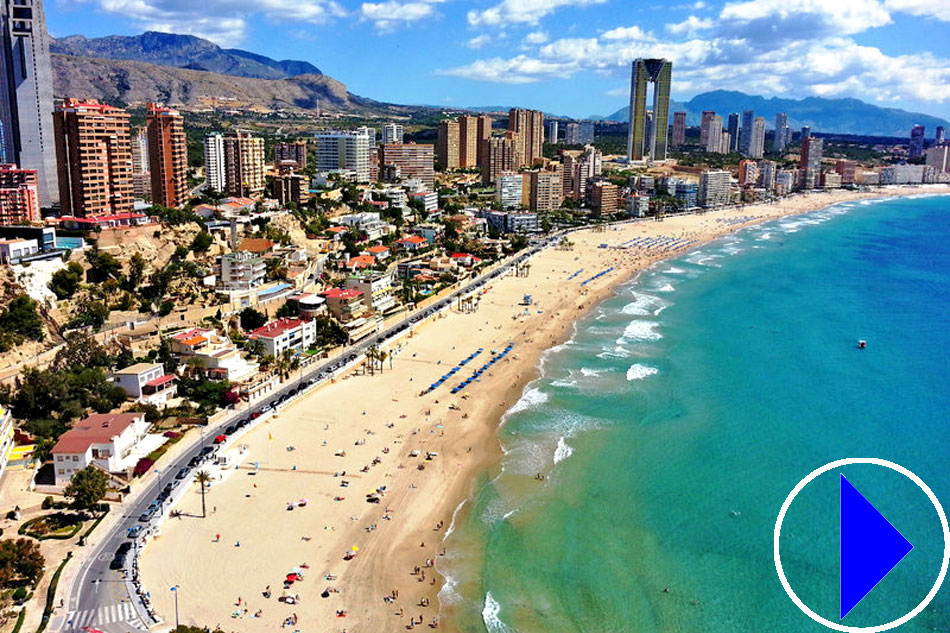 More info: The well known town of Benidorm is located on the Mediterranean coast in the Alicante Province. It was once a small fishing village until the tourism boom of the 1960s and today Benidorm remains a very popular holiday destination and one of the most visited resorts in Spain, as well as being famous for its very lively nightlife.

Benidorm has two main beaches – the Playa de Levante ( Levante Beach or Sunrise Beach ) to the north and the Playa de Poniente ( Poniente Beach or Sunset Beach) to the south. The historic Old Town of Benidorm with its narrow streets and alleyways lies near the castle and is dominated by the church of San Jaime and still manages to retain some Spanish character. Next to the historic quarter are the wide avenues and commercial streets which make up the more modern Benidorm along with its iconic skyscrapers. In Europe, only London and Milan boast more skyscrapers than Benidorm.

Benidorm is famous for its vibrant nightlife and is a mecca for party goers and groups. With its with modern nightclubs, over 160 disco-pubs and venues to suit all tastes there is something for everyone. The main areas for nightlife in Benidorm are the “strip” of Levante Beach Boulevard which goes down the beach, “The Square” around Avenida Mallorca, Old Town Benidorm, and the huge dance clubs on the main road just outside of Benidorm.

There are plenty of gay venues and events in Benidorm. Benidorm’s gay scene actually goes all the way back to the 1960s, when its first gay bar, called Gay Bar Pretex opened. Since then, Benidorm’s gay scene has grown throughout the narrow, cobbled streets of the Old Town. There are many small gay bars as well as some clubs. The majority of the gaybars in Benidorms Old Town are centred around the Calle Cuatro Esquinas and Calle Santa Faz.